Determining who is liable for freight claims usually falls under the Carmack Amendment, a law 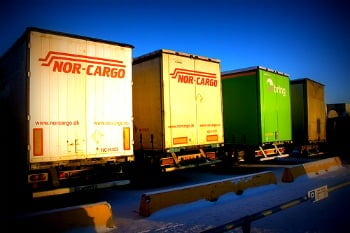 applied to motor carriers by Congress in 1935 that was adopted to achieve uniformity in rules governing interstate shipment.

The Carmack Amendment applies to shippers and carriers involved with interstate shipments of all commodities, with an exception for farmers, fisherman, and a few other categories.

The Carmack Amendment holds a motor carrier liable for freight claims, without proof of negligence, unless it can prove that a) it was not negligent AND b) one of the five exceptions outlined in the law was met.

There are five exceptions outlined in the Carmack Amendment that a motor carrier can use to deny liability for freight claims.  The burden of proof is on the motor carrier to prove that that one of these five conditions was met and that cargo damage was not due to their negligence.

The Act of God defense applies when a carrier can prove that damage was caused by a physical phenomenon or natural disaster that they can’t control.  A few examples: a wind blows over a trailer, there’s a tornado or a flood, or the driver has a heart attack.

Not every weather condition is considered an “Act of God” under the Carmack Amendment.  The disturbance must be of such unanticipated force and severity that the carrier couldn’t have been expected to take protective action against it.

As stated in Standard Brands, Inc. v. Nippon Yusen, the carrier can be held liable for freight claims if they “failed to act as a reasonable prudent person would under the circumstances and failed to take reasonable available means to avoid or minimize the loss resulting therefrom.”

If damage is caused by hostile acts of military forces that are enemies of the government, the carrier can’t be held liable for freight claims.  Acts during wartime fall under this exception, but things like organized crime do not.  Terrorism may fit under this exception but there isn’t much case law at this point to determine how the Carmack Amendment will be applied in such situations.

3. Act or Default of Shipper

If the carrier can cite something that the shipper did that caused the damage and prove that they were not negligent, the motor carrier cannot be held liable.  Examples include if the shipper loaded the product wrong or if the product was packaged poorly.  Errors in the way the contents of the load were described by the shipper in the bill of lading also fit under this exception.

Another exception to the carrier’s liability under the Carmack Amendment is if the government (“the public authority”) is the source of cargo damage.  Policy actions such as quarantines, road closures, product recalls, or trade embargoes apply under this exception.

5. The Inherent Vice or Nature of the Goods Transported

A good with an “inherent vice” is something that is naturally subject to defects, diseases, or decay which will cause it to deteriorate with the lapse of time.  Examples of such goods include things like fruits and vegetables, cheese, and tobacco.

The carrier has the burden of proof to show that damage was caused solely by the “inherent vice” of the goods and not by their own negligence, for example, failing to follow the shipper’s instructions for handling.

Contracts can extend or overrule any provisions of the Carmack Amendment and change who is liable for freight claims. Contract language, for example, can be used to incorporate Carmack for intrastate moves and for exempt commodities.

As always, consult your HNI Relationship Manager and/or your attorney to ensure you fully understand your rights and responsibilities under the Carmack Amendment.

FAQs About the Carmack Amendment

The FMCSA's Agenda and What Motor Carriers Should Be Aware Of

How to Develop a Fool-Proof Corrective Action Process