Insurance guy rides in a truck (part 2 of 3)

I log a lot of windshield time. I’ve shared the road with more semis than I can count. But I had never been in a semi.

And that sounds like an important piece of the puzzle to be missing. And maybe a bit out of touch. 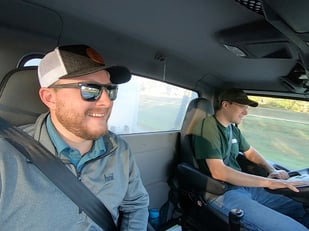 I was paired with a rock star of a driver who was key to helping me fully digest the driver experience. Here’s more of what I learned by cruising with Leroy for a day:

Safety & risk from the driver seat

I talk risk & safety for a living, so I was really hoping to soak up some insight in thiscategory. And I wasn’t disappointed. I came away with a big revelation around the idea of complacency – but not in how I’ve heard it described before. I’ll circle back to this thought.

So often driver training is rooted in fundamentals – how to do this, how not to do that. Do your pre-trip. Don’t forget to check your mirrors. If Maslow had a pyramid for trucking safety, the fundamentals would be at the base. You must make sure this box is checked, but even though it’s checked, there’s no guarantee you have a safe driver on your hands.

Attitude would be the next layer of the pyramid. I want a driver to be positive, attentive, looking to improve and have that ambassador mentality. Leroy told me stories of multiple drivers that had applied with many years of experience but when they did a ride-along, had a poor attitude. They did things a certain way and weren’t going to conform to any new expectations. They came in as rocks instead of sponges. And they surely would have weighed down the company culture. Perhaps they individually wouldn’t have been a danger over the road, but if that attitude pollutes the driver pool as a whole, you’ve got a mess waiting to happen.

At the top of the pyramid is what I’ll refer to as responsibility. Here’s what I mean: I own a 95lb pit bull / rottweiler mix. My neighbor has a small chihuahua. If my neighbor’s dog goes into attack mode, you’ll walk away with a scratched-up ankle. If my dog goes into attack mode, someone is getting seriously injured. So, even though he’s incredibly well behaved, the fact of the matter is that he’s a big, strong animal that physically has the potential to cause bodily harm. As such, a big dog owner has a huge responsibility to those around them.

As a truck driver, you have the big dog. And there’s an incredible responsibility that comes with putting your hands on a steering wheel because that truck has the potential to ruin lives. Period.

But as I watched Leroy maneuver the truck with a nonchalant confidence, I could see how easily that could be forgotten. These truck drivers get so good at their job that I’m sure they become as comfortable behind the wheel of a semi as you and I might a go-kart. Honestly, after spending just one day in the truck I felt so comfortable that the rumble of the engine and fresh air had me ready to doze off.

And that’s my new understanding of complacency. Usually, I hear complacency described around fundamentals or the mechanics of driving. You’ve done an action a million times without hiccup and on attempt one million and one, you neglect to do it properly and something goes wrong. What I believe it to be in trucking is complacency around responsibility. And it only takes a second for that complacency to be a disaster.

With that said, I believe every trucking company would be better off dedicating more time and training to attitude and responsibility. Measuring performance in those areas is certainly more challenging, but I believe it to be a major factor in preventing losses and overall success.