Insurance guy rides in a truck (part 1 of 3)

I log a lot of windshield time. I’ve shared the road with more semis than I can count – taking note of load securement, equipment, logo and call-to-action for aspiring drivers. I have met with countless truck leaders, have interviewed their drivers, have digested the reg books alongside them and have even kicked off driver meetings. I’m very much in transportation. 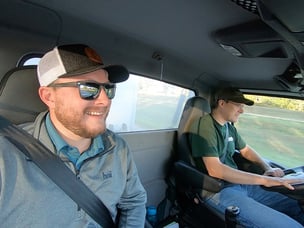 But I had never been in a semi.

And that sounds like an important piece of the puzzle to be missing. And maybe a bit out of touch.

So, when my client suggested I join one of his drivers for a day, I pinned him down on the offer. What started as a joke quickly turned into me sitting in the passenger seat of a day cab doing nine hours’ worth of LTL drops and logging about 300 miles up to northern Michigan.

Think there’s a lot for an insurance guy to learn on a trip like that? You betcha.

I was paired with a rock star of a driver who was key to helping me fully digest the driver experience. Leroy has been a company driver for 5 years and nowadays spends more time training drivers than he does driving himself. He plays an important role in the company’s hiring practices, serves on the safety committee and even records videos to be shared with his peers (more on that later).

Here’s what I learned about the driver experience by cruising with Leroy for a day:

A fully loaded truck moves a lot different than a daily driver. Specifically, it takes a lot longer to bring a truck to a halt. You know that fleeting moment when you’ve tipped a little too far back on your chair and you’re a fraction away from falling on your head? That’s the “oh sh*t” moment a truck driver gets when a car zips in front of them without a moment’s notice. It happened multiple times on our trip and I don’t think any of the drivers had any idea.

Also, a truck maneuvering through a city is poetry in motion. Think of an NFL lineman twirling like a ballerina. A semi seemingly isn’t meant to fit in a city setting with congested traffic, tight intersections and antsy drivers. Yet, they somehow pirouette a 90 degree intersection while they pass a guy crept out too far at a red light with his nose buried in his phone, oblivious to the magic he just missed.

The role of a driver

A truck goes from A to B. A driver does much more. A driver is your best and maybe only real opportunity to make an impression on your customer. I don’t know how much that role is stressed upon drivers from company to company, but boy it should be. Have a friendly attitude when you get to the customer’s facility. Do what you can to help unload. Be a problem solver. Communicate with the customer that you’re close. Be an ambassador of the company!

Leroy told me a time he delivered a load that was two days late. It wasn’t his fault, but when he got to the yard and talked to an upset customer… he took ownership of the company’s error and offered an apology on behalf of the company. Because he was acting as an ambassador – not just an individual who takes a load from A to B. That sort of service leaves an impression. That sort of impression keeps a customer.