Many in the insurance industry believe it's time to pass a long-term extension for the terrorism insurance law. The Terrorism Risk Insurance Program Reauthorization Act is set to expire Dec. 31, 2014, and industry representatives and legislators have been vigorously debating the act this fall.

What's TRIPRA and Why Does it Matter?

TRIPRA was passed in 2002 in the aftermath of the 9/11 terrorism attacks. After the attacks, it was critical that terrorism insurance be available. In a nutshell, TRIPRA spreads around the cost of acts of terrorism between insurers and the federal government. The government pays for 85 percent of coverage for terrorist attacks if damages are greater than $100 million. The government can earn back losses by charging insurers. 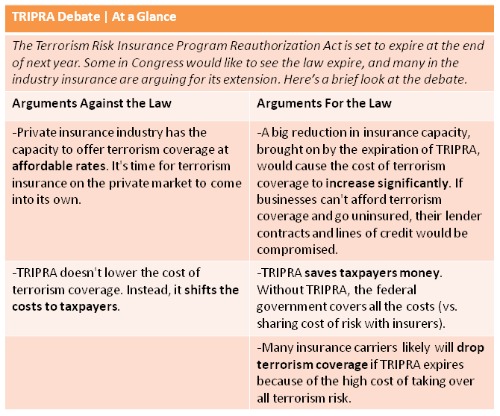 There is a real possibility that it may go away or be changed dramatically. If this act expires, the sharing of claim costs goes away. This is a big deal because businesses likely will lose coverage for acts of terrorism. Why? A big reduction in insurance capacity, brought on by the expiration of TRIPRA, probably would cause the cost of terrorism coverage to increase significantly. If businesses can't afford terrorism coverage and go uninsured, their lender contracts and lines of credit would be compromised.

Digging Into the Terrorism Insurance Issue

Advocates for letting TRIPRA expire hold that the private insurance industry has the capacity to offer terrorism coverage at affordable rates, and that it's time for terrorism insurance on the private market to come into its own. The argument also has been made that TRIPRA doesn't lower the cost of terrorism coverage, but that it instead shifts the costs to taxpayers. Supporters of TRIPRA point out that the act actually saves taxpayers money. With the law in effect, the cost of covering acts of terrorism is shared between the federal government and the insurance industry. Without TRIPRA, the federal government covers all the costs.

Opponents of TRIPRA also argue that the act encourages businesses to stay in high-risk locations — chiefly the East and West coasts. The implication is that only the nation's most densely populated areas are susceptible to terrorism. The fact is that any venue that brings together lots of people (for example, a hospital full of patients, a sold-out sports area, or a university campus) could be a target of terrorism.

As for next steps, our leaders in Washington likely won't pick up the TRIPRA issue again until next spring. Insurers were warned that renewal of the act, if it happens, likely won't take place until late 2014. Insurance insiders say they won't be surprised if the decision runs up against the expiration deadline as it has in the past.

Where do you stand when it comes to TRIPRA? Are you in favor of Congress renewing the act or letting it expire in 2014? Share your thoughts in the comments!

7 Reasons Why Insurance is Important

10 of the Weirdest Insurance Policies We’ve Come Across

Lloyd's of London Risk Index: What Are Your Emerging Risks?