Fraud, in all seriousness, is not a laughing matter. The FBI reports the impact of insurance fraud now totals nearly $30 billion dollars a year. 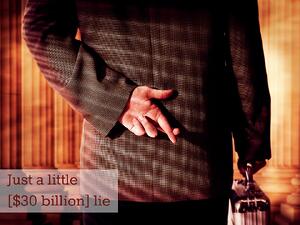 And now, for a moment of levity, are the stories of six would-be defrauders who couldn’t quite get their act together.

A change in visa laws tripped up this fraudster. After faking his death in a canoeing accident, Briton John Darwin was living it up on his own life insurance money in Panama — until visa laws changed. Panama required increased identity verification, an obstacle for the deceased Darwin. Darwin packed up and headed back to the U.K., where he faked amnesia. Darwin’s story quickly unraveled, and both he and his wife went to prison.

2. Till death do us part

Don’t leave behind your wife with a broken heart and all the bills. That's what one Long Island, N.Y., man discovered after he faked drowning to collect insurance money. "While I was crying and thinking he had drowned, he was vacationing in a resort and having a drink in the pool," said Evana Roth, wife of the alleged deceased. Her husband, Raymond Roth, faked his death and enlisted a relative to help him keep the money from her. When she discovered the truth, she quickly turned him in.

Would you chop off your arm to collect on a dismemberment policy? Neither would Michael LeDuc. That's why he faked an amputation instead. To fool his insurance company, Michigan resident LeDuc submitted forged medical records showing he lost an arm in a wood chipper. His insurer caught the fraudulent paperwork. Apparently, it's hard to prove an arm amputation with two attached arms.

4. She should have ordered the salad

There’s a WHAT in your soup? Carla Patterson tried to defraud a Virginia Cracker Barrel restaurant for a $500,000 insurance settlement after claiming she found a mouse in her soup. An investigation found that the mouse didn’t have any soup in its lungs and never was cooked. She was sentenced to one year in prison.

Rabbi Sholam Weiss masterminded one of the largest insurance fraud cases in American history. Weiss organized a criminal coalition of businessmen who defrauded their way to a staggering $450 million. The judge, in turn, rewarded Weiss with a staggering 845 years in prison. Weiss’ projected release date from a Pennsylvania penitentiary is November 23, 2754.

Las Vegas cosmetic surgeon Shanita Flax found an insurance fraud opportunity in a government program that paid for cancer survivors’ breast implants. Her two-part plan involved pocketing cash from patients and filing fake paperwork with the government. If her plan had worked, we wouldn't be writing about it. She was charged with 18 counts of theft and one count of attempted theft.

While these frauds may seem crazy, they do happen! And these scenarios are worth keeping in mind so you don’t find yourself in the middle of the next big news story! If you have any questions about how your company may be at risk for insurance frauds, contact HNI for a risk evaluation.