A woman files a claim with her auto insurer, saying that a hit-and-run driver caused damage to her car. But, investigators found contradictory comments on her Facebook page—comments that blamed her daughter for the accident. The woman was subsequently convicted of filing a fraudulent insurance claim. 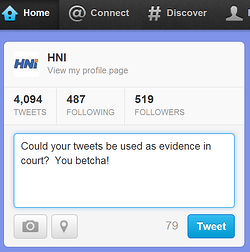 In another case, police discovered that two people in separate cars in a crash had each other listed as “friends” on Facebook. One even went so far as to write a post about the accident! When investigators confronted the individuals with the information they learned from social media, they confessed to a fraudulent claim. Now, a warrant is out for their arrest.

Fighting Claims Fraud, One "Status Update” at a Time

Staged auto accidents like the one described above and other types of insurance fraud place a huge burden on the industry and make costs higher for everyone.

With the growing amount of information now available on social networking sites like Facebook and Twitter, claims professionals have discovered that social media can be a useful investigative tool. Information obtained from social media may contradict or disprove statements made by a claimant, and conversely can provide confirmation or affirmative evidence to help resolve a claim.

Other Uses for Social Media in Claims Handling

Aside from investigating claim validity, claims professionals are also using social media to save time and money searching for claimants and witnesses, stay informed about a claimant’s condition if information is not forthcoming, and even expedite claims adjustment by using videos or written accounts of losses posted by the insured (e.g., a claimant posts a cell phone video of a house fire on YouTube, allowing the insurance company to verify the losses and expedite the resolution).

The relatively new practice of using social media for claims investigations has opened up new areas for questions about privacy. To date, no court case has rejected an insurer’s ability to use information found on social media to disprove—or prove—a claimant’s case.