Does the Trucking Industry Have a Sexual Harassment Problem?

“As a Female Truck Driver that has been in the industry for over 35 years, I have been called everything in the book. I've been told dirty jokes, but I 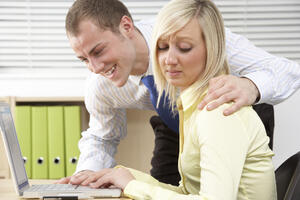 personally don’t let it bother me.

I have a real good friend that works in an office of a trucking company.  She is the only female there now. In the beginning the jokes were just jokes. But over the last several months, the jokes have taken on a different tone. They are more sexual in nature.

The Manager of the Local trucks told her he had a sexy dream about her, and proceeded to describe the dream. The Maintenance Supervisor refers to her by her cup size instead of her name. I told her she needs to let someone know. But she said even the Safety Director has made sexually suggestive remarks.

She is continuing to go to work because she can’t afford to lose her job. So how would your company handle this situation?”

We saw the above scenario posted on Linkedin and felt compelled to respond.  We responded to her directly, but there’s a lesson for employers in this situation as well.

Sexual harassment in trucking is an issue that no one really wants to talk about.  Women are a small minority in the trucking industry, and any sexual harassment red flags often go unnoticed.  Companies can’t afford to lose women drivers due to this.  Aside from the ethical reasons for making the trucking industry a friendlier environment for women, the driver shortage we’re experiencing makes this problem something to tackle head on.

At this point, almost every company has a policy in place and training program on sexual harassment.  But even if you have a perfect policy on paper, recognize your employees aren’t perfect.  The most perfect of paper trails will do little to protect your company in court if it doesn’t actually prevent harassment from taking place in your company.

While the case above is clearly inappropriate, there are a lot of scenarios that are a little more subtle.  It's hard to definitively say exactly what behavior constitutes harassment because much of it depends on how the person on the recieving end percieves it. Small offenses, if let slide, can snowball and build to situations like the one above.

Especially in male-domintant industries like trucking, women want to feel included and feel part of the team.  Women want to be comfortable, and they want the men they work with to feel comfortable around them, not fall silent when they walk into a room for fear of causing offense.  It’s hard to firmly put a foot down and risk offending a co-worker if you’re not 100% sure of the intentions behind a comment or gesture they made.

When a person complains of sexual harassment, they are protected by law from firing or other acts of retaliation.  But often small acts of retaliation are hard for a victim to prove.  For example, if a manager writes things like “not a good team player” or “not fitting in with company culture” on a victim's performance review, who can really judge if this reflects reality or if it is influenced by previous complaints of sexual harassment?

Build a culture of respect

Your long-winded harassment policy isn’t going to remain top of mind for anyone in the company for long.  You need to remind all of your employees clearly and often about sexual harassment to build a culture of respect within your company.  Bring it up at the company meeting, hang signs in your workspace, reference appropriate behavior in your employee reviews, or do whatever it takes to get people thinking about sexual harassment.  Encourage employees that aren’t directly involved in an incident to speak up to take some of the pressure off of the victim.

Just having a policy in place isn’t enough.  Most of the companies who have been slammed with massive payouts for sexual harassment cases were doing everything right on paper.  Take the case of Aaron’s Inc. for example, who was recently ordered to pay $95 million in damages to a former employee who was a victim of sexual harassment. They had a comprehensive policy.  They trained their employees on it.  They had a confidential reporting hotline.  But when there was an actual incident, they still dropped the ball.

Drive the message home with management

While everyone in the company needs to be aware of sexual harassment risks, those in positions of leadership need to be even more sensitive to this risk.  Supervisors and managers should constantly be working to make sure that all of their direct reports feel comfortable in their work environment, and keep an eye out for any discomfort their employees may be causing to others.

Not only can the company be held liable for incidents, managers can also be held personally liable for failure to report and address harassment that took place under their watch.

Insure yourself against the risk

Employment Practices Liability Insurance (EPLI) is a must for all companies in the transportation industry.  Can your company afford a $95 million hit?  EPLI covers all costs associated with allegations of discrimination, sexual harassment, and wrongful termination.

Even if a company is doing everything right, the uncertainty and gray areas surrounding many sexual harassment cases makes it impossible to shield from all potential litigation.  And regardless of whether a company is judged innocent, these types of cases are extremely expensive to defend against.

A renewed commitment to making the transportation industry open and welcoming to women, paired with good EPLI coverage, is the recipe for steering clear of damaging sexual harassment incidents.