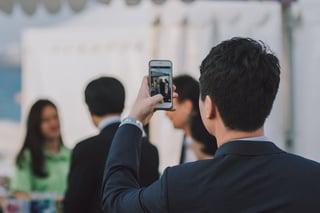 1. The NLRB is known for its outrageous, absurd and, biased positions favoring employee groups.

2. In this case, the Second Circuit clarified that not all recording policies are unlawful. All employers need to do is prepare policies with a little more specificity as to what is permitted or not permitted.

3. The Second Circuit is not a controlling federal circuit for the most of HNI clients.  Most of our clients reside within the jurisdiction of the Seventh Circuit.

What Whole Foods did wrong

When reviewing various articles on this case, several of the articles indicated that Whole Foods (the employer) had two separate policies prohibiting recordings:

“In order to encourage open communication, free exchange of ideas, spontaneous and honest dialogue and an atmosphere of trust, [employer] has adopted the following policy concerning the audio and/or video recording of company meetings:

It is a violation of [employer] policy to record conversations, phone calls, images or company meetings with any recording device (including but not limited to a cellular telephone, PDA, digital recording device, digital camera, etc.) unless prior approval is received from your Store/Facility Team Leader, Regional President, Global Vice President, or a member of the Executive Team, or unless all parties to the conversation give their consent. Violation of this policy will result in corrective action, up to and including discharge.”

“It is a violation of [employer] policy to record conversations with a tape recorder or other recording device (including a cell phone or any electronic device) unless prior approval is received from your store or facility leadership. The purpose of this policy is to eliminate a chilling effect on the expression of views that may exist when one person is concerned that his or her conversation with another is being secretly recorded.  This concern can inhibit spontaneous and honest dialogue especially when sensitive or confidential matters are being discussed.”

My biggest issue with the employer in this case is why have two separate and distinct policies on the same issue as it does nothing other than confuse the employee and create ambiguity?  Courts rarely rule in favor of an employer when ambiguity exists. Here the NLRB used this as an opportunity to assert a National Labor Relations Act violation that protects video recording if employees are acting in concert for their mutual aid and protection and no overriding employer interest exists.

Some protections should be permitted

The NLRB asserted that examples of protected activity includes picketing, documenting unsafe workplace equipment or hazardous working conditions, documenting and publicizing discussions about terms and conditions of employment, documenting inconsistent application of employer rules, or recording evidence to preserve it for later use in administrative or judicial forums in employment-related actions. The Second Circuit didn’t necessarily agree that all these examples where protected, but indicated that some protections should be permitted to employees who view a need to record an incident at work.

The no-recording policies in this case were rejected because they prohibited all recording without management approval and that meant employees would reasonably construe the language to prohibit recording protected by the National Labor Relations Act.  The Second Circuit did specifically note that not every “no-recording” policy that places some limits on recording and video in the work place violates the NLRB regulations. The Court also stated that the employer’s interests in maintaining such policies “can be accommodated simply by their narrowing the policies’ scope.”

If you have a “no recording” policy in place, you can still maintain it.  However, I would suggest you have corporate counsel review the policy language to make sure it falls out from under the general catch-all “no recording is permitted under any and all circumstances”.